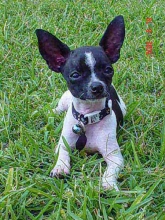 Arnold Mendoza (a black & white Chihuahua), entered the world on March 12, 2002 and joined our Lord on May 12, 2006. He was the son of Tiny Tim Holloway and Candy Two. He was a Cajun mud bug because he was born in Louisiana. Arnold got 1st place for Smallest Dog and 2nd place for Most Patriotic in the Barksdale AFB Bark In The Park 2002. He resided in Bossier City, LA; San Angelo, TX and last but not least, San Antonio, TX. He was an Air Force brat. We thank dad (Michael) for picking the best dog a person could ask for. Arnold was a part of the family and was so loved. He was as handsome as dogs get. We’ll miss his energy and company. You were never alone when you were with Arnold. He loved to be held and played with. His favorite toy was a stuffed squirrel that his sister Alyssa gave him. He was our protector; he would always let us know when someone was approaching our house. Arnold would bark until he felt we were safe. He leaves behind, Ebony, the long haired Dachshund. She was like a sister to him. She misses him dearly with all her heart. He leaves us with wonderful memories from the day he entered our lives to the day he left. He will always be remembered in our hearts. Love, Alyssa(sister), Andrew(brother), Stella(mom), Mendoza, Adolfo(grandpa), Chay(grandma), Tina(aunt), and Adolph(uncle) Hernandez.