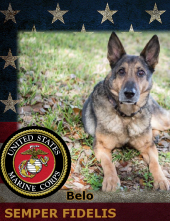 Belo
MWD Belo L696
USMC
United States Marines, David, Ryan, and Belo were family for different reasons and different times. Ryan and Belo were working partners, while David opened his heart to Belo when Belo retired from the USMC. Both men share their personal thoughts about Belo, their fellow Marine, friend, and family member.
–David Alviar
Belo was one of the most loving dogs I ever had the privilege of having by my side. He spent his military career in the United States Marine Corps on MCB Camp Lejeune, NC, serving as a Narcotics/Patrol dog, handled by my good friend Ryan. Although I did not originally handle Belo, he and I became very familiar with each other. He was the first dog I ever took a bite from, and man did he have a hard bite. When the time came for Belo to retire, I offered to adopt him and care for him since I was nearing the end of my enlistment. In July of 2015, he and I headed off to Texas. Since then he filled the hearts of my family and friends full of love and joy. He did so much for me and was there by my side during some pretty rough times. I am forever grateful for the love, loyalty and companionship he provided me during the last years of his life.
–Ryan Pilz
Belo and I were a dog team for almost seven years. We spent the majority of our working hours patrolling Camp Lejeune, which usually involved a lot of first responder duties,but we also engaged in community-oriented policing with the public.
One of my favorite moments with Belo was when we were still a fresh team and getting to know each other. We were in our patrol vehicle, and an individual approached us to ask for directions. At first things were fine, but after a few minutes of chatting with this guy, something in his demeanor changed enough to make me suspicious. It was not anything overt, but Belo sensed it as well. From directly behind my left shoulder I heard Belo’s deep, low growl, and I knew in that moment he would always have my back.
He and I formed a bond that strengthened over the years. We spent many long hours out in the Carolina heat or patrolling what seemed like endless night shifts. It was just the two of us, and that made everything okay. Belo was kind, gentle, and goofy, but he was ready to jump into action when it was warranted. I am so grateful he was my partner for the time we were together.