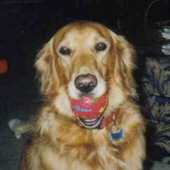 A family member and best friend is gone. Such deep hurt, such unrequited love and the thousand pleasant memories of a shared life. Perhaps the latter, while not diminishing the sadness, can overcome in some small way a sorrow that penetrates all my daily activities. Charlie became an extension of my own persona, his presence a joy and comfort, and his loss a crushing bereavement. His years were rich and wonderful and secure, and it is indeed a healing solace that I and my dog equally contributed to such a loving relationship. Even death cannot break this immutable bond. He will be with me again as he runs to my open arms at Rainbow Bridge.

Charlie, a beautiful golden retriever, was saved from death at the old Animal Control Facility the day before he was to be killed. I went there, not to adopt a dog, but to take pictures for a brochure for a new humane society. I saw him from afar throwing himself again the wire sides of his cage like a trapped wild animal. From where I was, I couldn’t tell what breed he might be; but I knew I had to help him. Charlie was his name, which I kept because that was the only thing he knew. He was turned in by his owners at the age of one year and showed signs of neglect.

As director of an animal shelter for 13 years and in the animal welfare business for over 40 years, Charlie’s death has left a huge hole in my heart. I’ve had several dogs and cats, but Charlie was my true soulmate.

During his 14 years, Charlie received his Canine Good Citizen Certification. This training brought us so close. Charlie went on vacation to Colorado with us every summer and loved the cool air and all the critters to chase. The first time we went to Colorado in the winter, we realized that Charlie had never seen snow and he wouldn’t wet on it. He held it for 18 hours and finally in front of the Safeway in Estes Park, Colorado, he could hold it no longer. He stood there wetting for what seemed forever. He finally became friendly with the snow and loved it.

Charlie was my best friend. He was by my side at all times, waiting for me to return home, and always ready to go for a ride through the many banks’ drive through windows to get his treats. They always asked about him if he wasn’t with me. There was only one ball he wanted; it came from the grocery store and I bought them out when I heard they were discontinuing it. He carried that ball everywhere and was a true retriever with it.

As he aged, Charlie contracted cancer and underwent surgeries twice – one for his mouth and jaw (part of which the wonderful surgeon rebuilt); the other removal of the anal glands. He recovered beautifully and gave us several more years together. He loved to go on walks around our subdivision – a 1 1/2 mile path through the woods, the only dog allowed to run off leash because he was so good about never running off. I used to tell people, “I can’t lose him if I try”. In his last months, Charlie began finding it difficult to get up – his back legs were growing weak. Then his cancer returned. I fed him rice, chicken, and vegetables for a few months. Finally on August 30, 2013, Charlie passed away peacefully being loved by Sallie and Don. Grieve not, Nor speak of me with tears, But laugh and talk of me As if I were beside you… I loved you so— ’twas Heaven here with you.