Farley "Master of My Fate" Carrillo 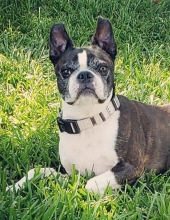 With a personality comprised of the perfect combination of gentleness, intelligence and sense of humor Farley made a lasting impression on everyone he met. Wherever he went, his handsomeness would often attract the attention of those walking by, and his charm would have them leaving with the feeling like they just made a new best friend. Farley frequently accompanied his Mom to work, serving as the office mascot with his little brother Major. At home and the office, Farley could sense what a person needed, whether it be comfort or a laugh and would do his best to provide it. His favorite local places to visit were the farmer’s market and McAllister Park, and he loved traveling to Dallas and Corpus Christi to visit family. His favorite yearly event was the Fiesta Pooch Parade, which he would participate in while wearing a crowd-pleasing taco costume. We welcomed Farley to the family a month after we were married, and he was a constant source of strength and companionship through many big life events. He was a good big brother to our other Boston Terrier Major and our son. We are very thankful for the time we had with Farley, as he changed our lives in too many ways to explain. Farley passed away while being held and comforted by his Mom, which is what he would have wanted as he loved her more than anything. He will be sorely missed, but never forgotten.