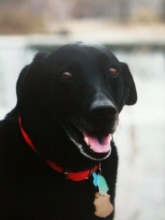 Goodbye to Our Buddy Hawkeye, Hawkeye was adopted from an Animal Society in Nashville, Tennessee and recruited by the U.S. Customs Service in March 2003. He was trained as a Narcotic Detector Dog at Front Royal, Virginia and graduated on July 26, 2003. He was then assigned to Del Rio, Texas and worked 3 years on the border until he was medically retired. He found several million dollars worth of narcotics during his service to include 75 pounds of Cocaine. We became so attached to Hawkeye and considered him our child. Hawkeye loved Robert so much he would follow him to the door every time Robert left for work, it was almost like he was saying: “wait! I want to go to work, too!” But with time I guess he realized he had not only one parent but two. Wherever I went around the house there was Hawkeye almost like a shadow, it was so funny to see such a large dog get up every time and follow me around the house. He was crazy about food and had an internal clock that told him when to come and nudge our arms when it was time for his meals. After time Hawkeye realized he was no longer a working dog, but a house dog. As Hawkeye aged his numerous medical problems worsened and he had trouble walking and getting up. At age 12, or 13, Hawkeye was only hanging on to please us. One of the hardest decisions we ever made was to put Hawkeye down, but at the same time it meant no more pain for our loved friend. He passed on April 23, 2010 and was cremated on May 16, 2010 Right before he expired I gave him instructions to wait for Robert and I by the gate on the other side. I strongly believe that if we are good in this life, maybe Our Heavenly Father that knows what makes us happy is going to give Hawkeye back to us. It is going to be a while, but it is possible. I just wanted to remind the reader how fortunate we are when pets of this kind cross our pathsthey give us so much joy and teach us a lesson of unconditional love. Rest in Peace buddy!