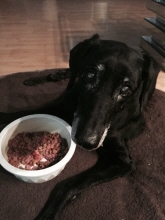 This is one of the last photos taken of our sweet girl, Holly. She was s black lab and Weimaraner mix. We rescued her 15 years ago from a kill shelter and she was a year and a half at the time. Those 15 years with Holly were quite a ride! She was freaky smart and definitely had her own ideas about how things should be run. She let us know when it was time to eat, time to walk, time for car rides, time for treats, and time to play. We adopted another dog, and she quickly got him on schedule. When we lost him to heart disease, we adopted two dogs, and she promptly taught them her rules. Holly was one of a kind, never complained, and was never comfortable with kisses and hugs (we did them anyway)…she was a no-nonsense dog. Her biggest love, besides Daddy, was food. Holly was never sick, but old age caught up with her. She got arthritis which slowed her down, but she was still in charge at the end. She was a GREAT once-in-a-lifetime dog and will be missed beyond measure. Her presence has left a void in our home and in our hearts. We know she’s running free at the Bridge now, letting everyone know she’s in charge. We’ll reunite with Holly again someday and we look forward to spending eternity with the smartest and strongest-willed dog we’ve ever known. We LOVE and MISS you Holly.