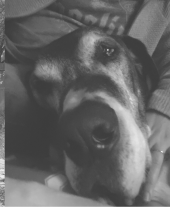 Hurley was entrusted to us when he was 18 months old. During the time we were blessed to spend with him, we learned a lot about being patient, being present, hiding food, and home repair.
When people met Hurley, they would always say the same thing, “That’s the biggest dog I’ve ever seen.” In truth, he was the biggest dog we had ever seen as well. Quickly we learned the reason he was so big was so he could carry so much love around. He had the biggest heart. His absolute favorite thing was to snuggle with or get pets from his family. He was always up for a hug. At night, when everyone was asleep, he practiced another favorite pastime: counter-surfing. He was a pro. When the weather was nice, Hurley liked to be in the backyard so he could look over the fence and watch TV with the neighbors. They enjoyed his company as well. In his older days, Hurley traded watching TV with the neighbors for car rides to daycare where he (of course) had many friends.
In the end, although his mind was still young and his heart was still strong, Hurley’s body gave out. After an amazing weekend of all his favorite things, he slipped away, in our home, on his bed, surrounded by love.
He was a good boy and he will be dearly missed.