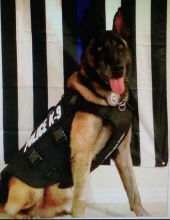 It is with great sadness that today (10/1/2020) I say goodbye to my Partner and Best Friend K9 Rocky (K92). I never thought today would be that day I would say my final goodbye to the best partner I could ever ask for. Rocky was not feeling well this passed Monday evening so I took him to he vet and they determined that he had ingested something harmful. Doctors attempted what they could but he continued to deteriorate in health. He truly lived a great life that only heroes can live. He served this great Country in Afghanistan (Islamic Republic of Afghanistan) VWD, from 2012 to 2014. In 2015 – 2019 he served the Citizens of Cibolo on the Police Department (K92). He assisted with multiple different agencies from local, state, and federal. He arrested in multiple arrest and seizures of illegal drugs and weapons. I have spent more time with him than anyone else in my life. Not only was he an amazing Police K9 Partner, he was also an awesome big brother to Angel 3rd, Damaris, Julissa and Olivia and son/protector to my wife Esthela.
I want to Thank you Rocky, K9s4cops, AmK9, City of Cibolo and the Police Department , Schertz Animal Hospital and staff for everything you did for him and for giving me the opportunity to serve along side him. Respectfully K9 Officer Angel Leos Jr.