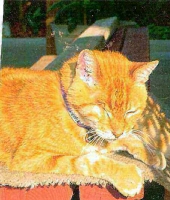 This is a memorial rememberance for my companion cat of twenty years, Kristian ‘Kiki’ Hunter. Died April 23, 2006

Kiki was a unique soul born into the Universe in mid-March 1986 in Tempe, Arizona. He was a Pisces like me, born in the Chinese Year of the Tiger, like me and was in many ways my Soulmate. I was attending a graduation party for a good friend in May 1986 when a tiny, orange and white striped kitten rushed out of the darkness and pressed against my leg as I walked up the path to my friends house. I had just arrived from Tucson, 100 miles away with a heavy heart. Only 3 weeks beforehand my new kitten darted outside into the surrounding foothills, succumbed to wild coyotes and died. I found his bloody collar only hours after his escape. This night, as I entered this party atmosphere, this orange, gentle soul now at my feet instantly began to soothe my sorrowful heart. I scooped him up, went inside the party and proceeeded to spend the entire evening cudding this kitten. He was strangely mellow, but attentive and without the frisky kitten rambunciousness so usual of little ones. He seemed to sense my hurt and sat in my lap purring and nuzzling reassurance. This I came to know was a behavior he exhibited the rest of his life. At the end of the Party, I approached my friend whose party it was and inquired about this new kitten that I had become strangely attached to. She told me that her next-door-neighbor’s cat had recently had kittens and, ‘…they don’t even take care of their kids, why don’t you take the kitten?’ I did not hesitate and gladly packed him up into my car and stopped at an all-night grocery to get food and litter. I smuggled him into my hotel room where he ate, climbed up on my chest, snuggled in under my neck and stayed there for more or less the next twenty years. Kiki was the most gentle, loving and unconditional companion I have ever known. I often said of him that, ‘He saved my life’, because he was always there and intuitively came to me when I was upset. He was with me through many, many, changes and set-backs in my life. Always loving and uncomplicated, ever reminding me that I was loveable even when I didn’t feel I was. Other animals also experienced the tender gentleness of this orange- striped bundle of love. New kittens brought into my home either to foster or adopt as a result of being abandoned by humans, instantly sought out Kiki who would ‘mother’ them. He would take any brand of ‘abuse’ from these youngsters and let them bat or bite him without reprisal. He was infinitely patient and gentle with all other creatures. He never ‘acted out’, scratching or peeing or other such antics as I’ve experienced with other companion animals. He responded to a special whistle I had for him by meowing and coming as soon as he was called. He would answer to his name with a soft, sweet mewl that matched his temperment beautifully. Not many cats you can say that about. He had an uncanny, intuitive way of being with me that I feel certain I shall never experience again in this lifetime. I have no human children and have chosen a vegetarian lifestyle in my ethical respect for animals. Kiki was for all practical purposes my son. And we never fully recover from losing a child.

I feel incredibily lucky and blessed to have spent nearly my entire adult life to now with this glowing, ‘Ambassador of Loving Companions’.

Kiki had a number of maladies over his long life that could have cut it short any number of times. The whimsical ‘9 Lives’ metaphor is true of him. He lost an eye in a cataract surgery and lost so much blood he nearly died. I carefully nursed him back to health and never left his side during the tenuous days of his recovery. Very much the way he never left mine. He had a major surgery to remove a vaccination site tumor that removed much surrounding muscle and soft tissue yet never complained during his recovery. He was a trooper and taught me how to get through my own surgeries without complaint. He had several cat bites because he never fought back when others attacked him. Some of these bites absessed and one of them required an emergency room visit and surgery to install a shunt. As it happened he was bitten a second time by this same neighborhood bully cat only a few days later and this bite too, absessed. I couldn’t afford another ER visit so soon so I took it upon myself to lance his wound, drain it and treat him. He didn’t struggle, fight or try to get away. It was as if he knew I was trying to help him. Our bond was strong and true.

I can only hope that my loving Grandma and and Father now have in their care my ‘little orangeman’. Kiki you will ALWAYS be loved and most terribly missed. You will be my Little Orangeman forever and I love you with all of my heart. Sleep well my little one.