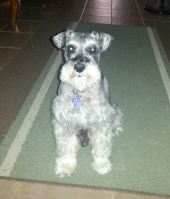 Booka was Born in El Cajon, Ca. he was 4 months old when we got him, talking about a ” Sweet Little Guy” he was.

I received him free from this Lady that I knew, if fact she had asked me before Booka was born if I had wanted a Puppy, I thought that she was going to give me a run of the mill Mutt. In reality Booka’s Mom and Dad were Pure Bred Mini-Schnauzers and also I might add the both were Champions.

My Mother Lorene took care of him for the first 5 years of his life while I was at work, he would always greet me when I came home, in fact when he was about 3-4 he would sit in my lap while I was watching TV, Booka was such a “Good Boy” , he really didn’t mind that good, but he never was bad.

I all most lost the Booka back in ’04, something had bitten him one day while I had him outside, I was at work and he was under my Mother’s bed and dying. I took him to the Vet’s as soon as I got home, It was on a Friday night and I did not get him back until late Sunday afternoon, boy, did I miss him.

Speaking of missing him, I took him to have him groomed a month ago and soon as I got back home I was looking for him, I am still looking for him still to this day……….