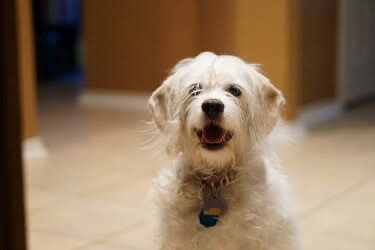 Our precious angel, Macy, was born in Laredo, Texas in June 2011.  She and her brother Max, was adopted by their lovingparents, Ramon & Mark in September 2011.

Macy was a loving soul, but had to know you a bit before warming up.  She enjoyed eating her treats, playing with her many toys, and chasing after any ball or toy in her yard.  She quickly learned to fetch, and was quick to tell you she was done playing.  She loved to give kisses!

When either one of her parents would arrive from work, she greeted them at the door, go grab her toy, and bring it back to play. Macy was a very obedient baby, learning new tricks and obeyed her parents.

Although her parents wanted her to dress up, she’d prefer just her collar.

​In 2014, she gained a brother, Morgan.  And in 2017, she gained her youngest brother, Buster-Pinky.  She only wanted to play with her siblings early in the morning, otherwise, she wanted her “me time”.

​She fought a courageous battle in illness her last 2 weeks.  Although she felt sick, she always had her tail wagging to show her love and affection.

​Macy was received into Heaven’s garden on July 26, 2021. She was greeted by her brothers, Max & Pinto, to run and play fetch for eternity.

She is survived by her parents, Ramon & Mark; brothers Morgan & Buster-Pinky & numerous aunts and uncles whom she barked at with love.

She will be greatly missed and loved, by all who knew her.  Macy has now gained her angels wings!  Until we meet again, precious princess.