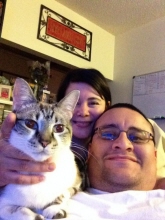 Manu Villegas was born on April 2008 and sadly passed away on June 26, 2014. He is survived by his loving parents Felix and Katherine Villegas. Manu was a very special kitty in our lives, I remember well the day we brought him home for the first time. We were at Diana Hernandez’s house by Hot Wells watching Open Water, Kathy decided she didn’t want to watch to movie; so she decided to lay down on her mother’s bed. Manu is special because he choose us. Kathy was laying in bed when this bundle of joy came up and jump on the bed to lay right next to her. Soon after that she came to me and asked me, “What do you think if we bring this kitty home?” I said, “sure”. The first thing we did was take him to Southeast Animal Hospital to visit Dr. Homer and his staff. He was bathe, cleaned and vaccinated. At the time they asked us, “What is his name?” Kat and I looked both at each other and were puzzled. The San Antonio Spurs were playing at the time and we just said, “Manu”.

Since then he became a part of our family and was a luvy dovvey kitty to us, he had his moments with other people that he wasn’t used to seeing and even though his name was Manu, he answered to “Papas”. Papas never left our side when we were at home. He was mama’s kitty at first but also would like to see what dad was doing as well. We had spent many late night watching Spurs games and playing Black Ops. He never really wanted us apart from each other, everywhere we went he would come to us.

This Papas will be missed by us, family, and friends that knew him and even though we won’t hear the bathroom door opened, the sink cabinet door squeaking, or the pantry door opened; we will always have you in our hearts. Your are in a better place now, my papas.