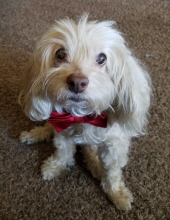 Mikey Garza was adopted by his parents, Crissy Garza & Jesse Longoria, on November 8, 2007 at the San Antonio Humane Society. As a puppy he loved to run, play, and chew on socks and window corners. Over the years his love for licking developed and he kissed his family and friends every chance he got. Mikey was a huge fan of massages, food, and any kind of treats. He loved all animals, big and small, but his favorite type were cats. He found them so interesting and could stare at them for hours. He only hated 2 things in life: grandma’s baths and going to the doctor. We saw Mikey grow and change over the years but are very proud of the little man he became. He was incredibly handsome, smart, silly, and empathetic to other’s feelings. Before his death, Mikey touched and changed the hearts of everyone he came in contact with, including finding loving homes for 4 dogs that were homeless, and locating the parents of 2 lost dogs. He also fostered 4 kittens before they were adopted. In the last year of his life, Mikey was diagnosed with an enlarged heart; this was a fitting diagnosis considering how much love he had for everyone. He was very strong going to all his doctor visits, and taking his medication to ensure that we had as much time with him as possible. Even though he was sick, that didn’t stop him from acting like he was completely fine. Mikey still ran, jumped, and did all kinds of activities against his doctor’s and parent’s orders. After 12 years of love and joy, Mikey passed away peacefully at home in the presence of family. We are extremely thankful to have had such a wonderful baby boy. Although our pain continues, we find some peace in knowing that his pain has ceased. Mikey left behind his parents, Celina (aunt), David, Stevie, & Joseph (uncles); Willie, Carmen, Jesse J, & Gilda (grandparents); Minnie, Zoe, Rolly, Millie, Milo, Nibbles, Rex, Angel, Summer, & Nathan (cousins) and numerous extended family and friends. His final resting place will be in Alamo, Texas at his grandparent’s farm.