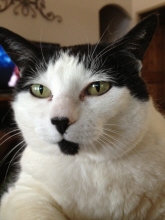 Miss Kitty left her beloved family on Good Friday, March 25th, 2015 after 15 happy and loving years. She is sorely missed and will never be forgotten by her family.

Her youth encompassed daily outside adventures demonstrating keen, cunning and capable hunting skills, often bringing ‘gifts’ to the back door of the house. We learned a lot about tolerance from Kitty, as well. She befriended other household pets; a cat, dogs nd a bird. Chubby, a lovely Cockatiel would hitch rides on Kitty’s back and travel throughout the house. When Mr. Tiggs arrived as a young, energetic trouble-making cat, Kitty was unimpressed, but tolerant; to an extent. As far as dogs, Kitty was unafraid and friendly, yet quick with a hiss and to deliver a right jab if the dog did not respect her authority. The best case of tolerance came several years ago when our youngest was three years old. She would pick up Miss Kitty, usually under the belly, and carry her upside down. Her belly extended, Kitty’s front paws nearly touched the ground and her back legs stuck straight up in the air. Her look of “Oh Lord, where is she taking me now” was telling. Yet, Kitty did not fuss, scratch or attempt escape. We believe she knew no harm was coming from the small child. She was also friendly to guests and made it a point to introduce herself with a meow and figure eights around their legs.

Kitty also demonstrated her dominance in the house by voicing her desire to eat or gain attention. Her loud, repeated meows earned her the nickname of Chatty Cathy, as she was persistent in getting what she wanted.

Kitty was a very happy and content individual as her loud purr could be heard from several rooms away. Jumping onto a lap or especially dad’s chest when he was reclining was usually the norm. Checking on the children and sleeping in the hall between their rooms displayed her motherly and guardian instincts earning her another nickname of Mamma Cats.

Her later years were spent lounging around the house and soaking up the sun on the back deck or front porch. Her hunting days behind her, she was content to spy prey from the confines of a window or deck and remember her days as a warrior with a peaceful yawn.

Now, she has joined her past friends and awaits us at Rainbow Bridge. Until then, her

spirit and memory persists during our daily activities and we miss her very much.