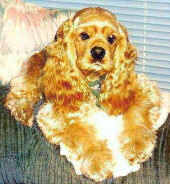 Mitzie “Pretty Girl” was our 1994 Christmas gift, and what a blessing she was! The first moment we saw her Mitzie jumped up and became glued to my lap . We immediately noticed her Charlie Chaplan mustache along with that beautiful fluffy hair. During her life with us she was an active football player always up for a game of catch. Along with our other dogs she would be competitive proving herself with a healthy game of tug-of-war with her favorite chew toy. She enjoyed to play, run, jump and often seemed to create her own games. When she was ready for our attention she would guide us to where her snacks were and sit patiently waiting for us to feed her one. She was quite the lady and possesed all the quaint etiquette such as not slobbering over her food, not gulping down a snack and always waiting for the order to eat before digging in to her dish. Her attitude and awesome personality brought a glow of joy into our house and for 15 years she provided companionship with the utmost of loyalty and devotion. She was there to celebrate all the birthdays and holidays with us and she always seemed to be as excited as we were. On the days when the weather would become a bit colder she would enjoy strutting herself around in a University of Michigan sweatshirt and in the warmer days she was often seen in a stylish Spurs or Cowboys t-shirt. Exactly two years later, Mitzie was joined by her sister Roxie “Putty Wutty” and the rest was history. The two were known to be quite the pair accompanying us on our Sunday Mission trails drives, enjoying the wind flop up their ears. They particularly enjoyed taking advantage of every opportunity to bark at those mischievous neighborhood cats of which they were not huge fans of. While at home, they truly loved lounging around the house being just themselves. Mitzie was such a blessing in our lives and we miss her so much every day she’s been gone. We know that as Mitzie entered doggie heaven that she will be greeted by her sister Roxie at the Rainbow Bridge. We imagine Roxie waiting at that Rainbow Bridge with a tennis ball or play rope ready to pick up where their last game ended. She will be greatly missed by her Moms, Snoopy, Brownie, Blackie and Dallas. She willl forever live on in our hearts… WE WOOF YOU!