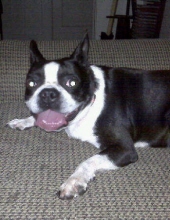 Nellie passed away peacefully on Friday, September 27th, under the care of Rigsby Veterinary Clinic surrounded by her mom, brothers, and sisters. Nellie was adopted in July 2009 and immediately loved the family she became apart of. Nellie spent years loving her family but also loved causing mischief in any way she could. Nellie was a gentle and friendly dog that never turned down an opportunity to be pet or snuggled. Nellie instantly loved anyone that scratched behind her ear, as it was her special spot and would cause her to kick her leg and smile wide. She had many unique hobbies and traits throughout her life. Some of Nellie’s favorite hobbies included ripping apart stuffed animals (more specifically ripping the button eyes and noses off) leaving behind tons of horrific, eyeless toys throughout the years. She loved running around and causing mayhem with the other family dogs, stealing human food when no one was looking, but most of all Nellie loved napping. As the years went on, Nellie took on multiple nicknames that she would answer to on top of being called Nellie, she was often called Nelliegirl, Nelson, or simply Nel. Nellie had many personality traits, the most prominent being a sassy attitude that typically included the most judgemental stare from her Boston Terrier eyes. Nellie was a family dog. She always understood that children, babies especially, needed to be treated more gently and always stayed near to keep watch of her siblings. Nellie loved McDonalds french fries so much, they were her favorite human snack. Her eyes always lit up and she’d excitedly lick her chops when she saw them. Throughout the years, through thick and thin, Nellie remained. Nellie dealt with a crazy family of four kids, and spent years dealing with the chaos and insanity kids bring, never once backing down. Nellie knew when her family needed her and was always there to make sure they were safe. Nellie was the glue that kept her brothers and sisters together during the most trying of times. Nellie has always been and will remain a huge part of this family’s story. Though it hurts to say goodbye, our family understands that Nellie’s age has finally caught up to her, that her conditions have become truly unbearable for her. It is with a heavy heart that we part ways with what is without a doubt the greatest companionship our family could’ve been blessed with. Nellie never stopped fighting and lived an astounding thirteen years. Nellie gave us years of unconditional love and patience. It will be hard to live life without her by our sides, but we are beyond thankful for our time together and our lives together. Nellie leaves behind her mom, Lisa Sanchez, her human siblings, Ramse Lambaria Gonzalez, Amber Salazar, David Salazar, and Phoebe Salazar, as well as her dog siblings Bubba, Charlie, and Ivy.