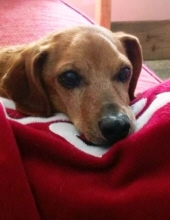 On April 26,2019 we said goodbye to our precious Nugget. Born March 29,2006, the only boy in a litter of 4, he came to our family in May of that year. This tiny Chiweenie coming into a home with 2 big dogs that he quickly took over and became the Alpha dog. Angel Baby to his Mama, Little Architeuthis to his Daddy, Nug-a-Bug to our girls, he had many names and knew them all. He gave unconditional love and caring. We called him our therapy dog because whenever someone was sad or sick, he would stay next to them until they were better. He was our Little General ruling over the troops that grew to 5 dogs. He would rally the troops when it was time to go outside with a commanding bark until they all lined up by the back door. An avid Spurs fan, his favorite player was Manu Ginobili and he would howl whenever Manu made a basket and his Daddy said “Ginobili”.
He was very expressive in his manner and looks. Having one special toy, he would give Mama a look if one of the others was playing with his toy that said “I want it back”. She always made sure he got it back. So smart, he understood whatever you said to him, if you ask him a question, he would always have an answer or a look that told you what you wanted to know. Mr. Perfect is what his Mama called him often. He enjoyed lemon cake and some Irish cream occasionally with his Daddy, it was their special time.
Words cannot express the love we feel for our special baby boy. He brought so much love and light into our lives and the world is a little darker these days without him.