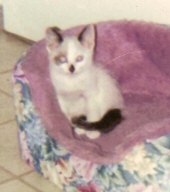 Daddy chose her on a July afternoon from a litter of kittens for sale behind a feed store. She was the only one that was snow white and she came to him immediately and curled Up beside his foot. They chose one another. He thought she was absolutely precious so thats the name he gave her. Mommy called her Baby. Always a perfect little lady, she was queen of the house. Strong-willed and Independent from an early age, she wanted what she wanted when she wanted it and she could stare you down to get it. Pampered and spoiled as was befitting her, she was a joy to us for 16 years. The end seemed to come so fast. In her final days she just seemed tired of living. She seemed to be saying, it’s time. I’m ready to go. She met death with dignity and died peacefully at home Just before dawn on June first. Although we were expecting it, the finality of her time with us brought overwhelming sadness. We are grateful that she never suffered an injury and that in her last years she was spared the Debilitating diseases and illness of old age. She still had the spirit of a kitten. She will never be Forgotten, never be replaced in our hearts and our memories. Our Precious Baby girl.