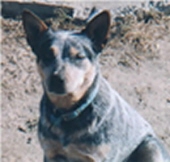 Pumpkin, who was only 9 in human years, left us early Tuesday morning to go to the Rainbow Bridge. She was greeted there by her only born son, Jake, who left us when he was only a few months old. She leaves behind her mother Pepper, her sister Misty, her step-son Jake, whom she adopted after the loss of her own son, and a family who cared for her dearly. She was with us from the moment she took her first breath up to her last.

Pumpkin became ill and it came to the point where we couldn’t do anymore for her. She had lost a lot of weight and she wouldn’t eat, but we kept trying, doing everything we thought possible to help her, but it was to late.

She lived a well-traveled life. Going back and forth to the ranch, and then to and from Kansas while I was going to school there. She was very protective of me and was always right next to me wherever I went, sometimes even napping on the couch together. She was my best friend and I love her dearly. She will be greatly missed by everyone that knew her.