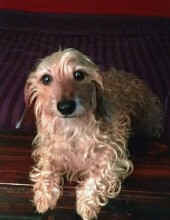 We lost our precious Rooney on Monday, January 7, 2019. He went into congestive heart failure at 1:30 am that morning. We drove him to the Vet to help us say our goodbyes and let him go. Of course, not without having a flat on the way! I think that God wanted me to hold my baby just a little bit longer. It was so hard. He lived 8 years and 3 months with a grade 6 heart murmur, which he was born with. The worst murmur he could have. He was a blessing during his lifetime and got us through some tough emotional times and was with us for our happy times. Rooney loved going “camping” at Rockport. He thought the Travel Trailer was bought just for him! God put him on earth to help us and make us happy, now that his job was done, God was calling him home.

If you believe in God and signs that he sends us, you will appreciate the text that I received from James while I was at work two days after Rooney went home. It made my heart happy. Below is our story.

James and I had been struggling since Monday. Going through all of those painful emotions and grief stages. Little Rooney was my everything and became James’ “Boy”.

When Rooney wanted a treat, he would sit on the kitchen floor looking into the living room and tapped his front feet 3 times (never more), swaying back and forth as he tapped. We came to refer to this as his “tap-tap-tap”. He made us laugh and, YES, we always got up and gave him a treat.

Wednesday was another sad day, as the emotions were still raw and we were missing him so much. The tears were still flowing. Below is the text that James sent me at work that day:

Baby, I just went out to feed all the cows and let the chickens loose. When I got closer to the swinging gate of our yard, Penny (our tiny 20-year-old dachshund) was jumping against it, then as I was almost there, turned around and ran towards the back door, turned around and did it again (like Rooney used to do). Once I got close, she was whining at the door (not scratching at all, like she normally does) and was doing Rooney’s tap-tap-tap routine. I swear it was the best imitation of him I have ever seen. I think it was ROONEY HIMSELF guiding her to tell us he is okay. He is finally home!

She made me cry and doesn’t even realize how comforting it was.

I love you. You would have thought the same thing. She has never acted that way before. I swear it was Rooney!

Rooney WAS ALWAYS the first to enter the house. Penny was ALWAYS the last. Not today. I feel so much better. I knew God would let us know he was fine. No matter how sick Rooney was, he ran from the gate to the door at full speed until I let him in. Today Slow Poke Penny did it for him!

I believe that Rooney will be waiting for us at the gate one day with a tap-tap-tap!