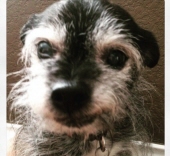 Roxie was born on 6/24/2001 at the Animal Defense League. She was adopted by someone and returned to Schertz Animal Control for destructive chewing sometime in late 2001/early 2002. She was set to be euthanized in April 2002 on a Friday. Luckily, her dad and I adopted her just in time on that fateful Friday. Of course, there were many instances of her destructive chewing that were noticed, but we looked past that naughty behavior.

All our sweet Roxie wanted is love and attention. She was the most incredible nanny to our kids as we began building our family; she would cuddle right next to the babies to protect them. Thats when she coined the nickname Mama Roxa.

She was a roadtrip traveler and she went on cross country trip with us many times. She enjoyed car rides, constant love from anyone, and LOVED to eat! No words can describe the happiness she brought to us and the love that we felt from her over the last 17 years.

We love and miss you Roxie and hope youre waiting for us at the Rainbow Bridge.