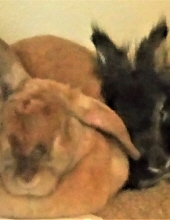 Tony was my very first rabbit. He just reached 2 years of age when I purchased him. Tony loved little kids and he liked meeting new people. His favorite fruit was mango. But it had to be a squishy mango, not firm because it would be too sour and he didn’t like sour things. His favorite veggie was kale. It didn’t matter whether it was frozen or fresh. His favorite forbidden snack was an oatmeal raisin cookie baked soft with a bit of cinnamon. He got those special treats once in a blue moon. He became more loving when we found Ryo. Ryo was a force to be reckoned with. She was very vocal, but she was so cute….no…she was very beautiful lionhead. She was roughly a year and a half old when I found her. She loved babies. Her favorite fruit was strawberries. Her favorite vegetable was romaine lettuce. Her favorite snack was wild berry rice crackers that were organic. I miss my babies so much. They are very much missed by the whole family.