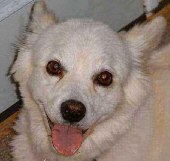 Sasha was born in October 17 years ago. When joining our family, she was the youngest of three dogs. Osso was an American Eskimo, Murphy, a golden retriever, and her. She out lived those two dogs and a third, Tabby our blue healer.

Sasha was my pal from the beginning. She played with me, slept by my side and was the first one to great me when I arrived home. She was sweet, intelligent and knew when I was feeling bad or just tired. She accompanied me on early morning walks until she could no longer make the miles, then blocks on our walk. She weighed all of 20 pounds and when inside was fierce, when there was a window between her and her foe outside.

She was well behaved, patient and a bit of a drama queen, according to her vet. She was totally spoiled, I’ll admit that. She would only eat certain things and some of her favorites became too hard for her in the end. Her favorite food was spaghetti, and we shared many plates over the years.

We tried to get her accustomed to car rides and cleaned up a lot of cars as a result of failed attempts.

She could look into your soul, if she chose to and was a very special part of our family. Sasha was set free on July 11, 2012 with her loving vet and staff at her side. She was a good dog.

She will be missed every moment of every day. I still expect to see her standing beside me , following behind me as I move through the house.

I love you Sasha.