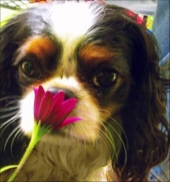 THE SORROW AND THE PUPPY

Louie C. K . says that when you get a puppy, you’re really bringing home future sorrow. The heartbreak Sue and I have felt this last week was ordained six years ago when we drove to a breeder outside of Ft. Worth on a rare snowy Texas day to pick up a tiny black and white Cavalier King Charles puppy. We named him Schuster after a favorite teacher.

One reason for getting Schuster was to quench the sorrow that enveloped us when our first Cavalier, Max, was killed by a car. I know it seems almost callous to transfer your affection from one dog to another so abruptly, like remarrying only weeks after your spouse dies. And in fact, at first I did feel guilty, as if I were being unfaithful to Max.

But barely six inches long and covered with fur that felt like silk, Schuster was too cute and too loving for me to withstand his charms for long. He scampered around the house wherever we went. When we left home without Schuster, he stood with his front paws on the window sill, watching until we drove out of sight. When we returned home, he greeted us as if we had been gone for years and wasn’t happy until Sue held him like a baby, tummy side up. When he was tired, he’d join me or Sue on the couch for nap, curling on our shoulder or the top of our head. He quickly made it his job to listen for the mail being shoved through the door slot. He would bark urgently as he ran to the door, took some letter in his jaws and shook it furiously. He was not about to let the mail harm us.

He loved toysnot the rubber kind, but stuffed, furry toys. We indulged him so much that when we came home with grocery sacks in our hands, Schuster would inspect them, hoping to find a new toy. Before long he had accumulated a whole collection of stuffed toys, which we kept in a basket. A couple of times a day he would go to the basket, and rummage through it looking for some particular toy. When he found the right toy, often bigger than he was, he dragged it to the middle of the carpet to lick and chew it, sometimes falling asleep with the toy as his pillow.

Schuster made it his job a couple of times each day to rush out into the back yard to bark through the fence at the neighbor’s dogs. The one time on a walk when he encountered the same dogs, both three times his size, without the protective barrier of a fence, he quickly hid between my legs.

The thing he liked best was going places, on a walk, in the car, or in a plane when we visited our children in San Francisco. On the plane, he would lie quietly in a Sherpa bag under the seat in front of Sue, on his best behavior as if he knew he might not be allowed to tag along next time if he was noisy or had to pee.

He quickly figured out that when I put on my shoes and a hat, it meant I was going somewhere in the car. He would follow me through the house, hoping I’d invited him to join me. If I finally asked him, “Do you want to go for a ride in the car?” he knew exactly what that meant and ran to the back door, where he spun in circles, whimpering if I took too long to follow him. A few times, when we got in the car, Schuster would stretch up to lick me on the nose, which I’m convinced was his way of saying thank you for this treat. When we pulled up a to a drive-through window at Walgreen’s or Jack in the Box, he jumped from the passenger seat to my lap and stuck his head out to see what the person in the window was going to give him, whether a dog cookie or a hamburger, which he graciously shared with me.

At Home Depot, I’d put him in the cart, and while I pushed, he put his front paws on the front rim of the basket, with manner of Leonardo DiCaprio standing in the bow of the Titanic and shouting, “I’m king of the world!”

And there we were, two kings traveling the world togetheruntil about a year ago. That’s when Schuster starting having little crazy fits. He would guard any of my clothes I had dropped on the floor and growl and snarl if he thought someone was trying to take his food away. Sometimes he’d come out of the closet where he liked to nap and where his dinner was catered, and as soon as he saw me he’d bark and run back to the closet. It took me a while to realize that he want me to follow him and to act as if I were going take his dog food, which may have been sitting there, untouched, for a couple of hours. This charade of ours somehow got him to eat his food, as if he could not eat unless I threatened to take it away. Sometimes, we weren’t sure what Schuster was growling about, but I learned how to deal with that. I threw a towel over him and carried him, snarling and twisting his body back and forth, to the back porch. When I put him down and retrieved the towel–sometimes after a brief tug-of-war–Schuster would trot out into the back yard and later scratch on the back door to come in as if hadn’t just been doing a Cujo imitation.

Although these spells were worrisome, most of the time he was still the sweet dog he had been as a puppy, playing with his toys and begging for car ridesuntil last week. On July 5 he began to act strange. He didn’t want his food despite my pretense that I was after it for myself. He didn’t come into the living room as he usually did after a nap in the closet to beg for ice from our drinks. When it was time to go to bed, he didn’t insist on his usual nighttime cookie. I carried him upstairs and laid him on his own little bed on the floor next to ours. He was half on and half off his bed but didn’t seem to notice. I knew something was wrong, and I laid on the floor with Schuster, stroking his head and back and telling him all the ways in which he was a good, sweet dog, and how we loved him…how he would always be our little puppy. Any sane person would say that, of course, he didn’t know what I was saying. But I think he did. I have to believe he did. The next morning, I looked over the edge of our bed to see Schuster lying on his bed. I waited the longest time for him to move or for a breath to swell his body. But that didn’t happen. Finally I petted him, and he still didn’t move. When I lifted him, his body was limp. There was no rigeur mortis. He felt like he should be alive. He should have been! But he wasn’t.

Our vet performed an autopsy, and she said that his heart valves were thick and inflexible. One of the small tendons that control the values had likely torn loose, and Schuster had died a quiet, painless death.

Going on with life is not so painless. In the week since then there was not been a day when I haven’t been in tears at least once. Schuster’s death continues to be something that simply should not have happened. There is something wrong with a univese in which an cute, innocent little puppy can die so early in his life..

The worst of it for a survivor is this: To make the sorrow go away you have to not think about the good times. I have to push down into some dark corner of my mind all the wet kisses, the ever wagging tale, Schuster running to greet us when we came home, how he rolled over on his back to get us to scratch his tummy, how we used to fall asleep together and I could feel the warmth of his body pressed against mine.

I have to put all that out of my conscious thoughts, but the thing is, I don’t want to. I don’t want to forget what a good dog Schuster was and how much we loved him, this funny little creature of another species. I want him to live if it can only be in my heart and my memories.

And so I’m weeping as I write this, knowing that inevitably the tears will go away and take the memories with them. That’s why I’m writing this as a reminder to myself and a testament to others that once there was a cute little black and white doggy whom we loved so much named Schuster.

ONE WEEK LATER: A PUPPY P.S.

It would be melodramatic of me to say that the heavens wept as I drove to our vet’s to pick up Schuster’s remains. Even I wasn’t weeping as I had every one of the six days since our Cavalier King Charles Spaniel died in his sleep.

I dashed through the downpour to the vet’s office. It sounded strange to me when I told the receptionist I had come to get Schuster. She disappeared in back for a moment and returned with a black cloth bag. Inside was an urn about a third the size of our dog when he was alive. On the top of the urn was a brass plate with “Schuster” engraved on it. I made it back to the car before I burst into uncontrollable sobs that drowned out the rain. The reason I’m writing this is to advise other pet survivors to arrange for a “personal” cremation, which means the ashes in the urn you take home are your pet’s alone. I put Schuster’s urn on a bookshelf in the living room next to another urn with the remains of our first Cavalier, Max.

I know it sounds unlikely, but having those urns where I can see them every day is comforting. I feel both dogs are still part of our lives. If you believe in a “Rainbow Bridge,” they are also messages to the departed doggies that you have not forgotten them. This all sounds sappy, I know. Really sappy. But sappiness is part of the sorrow that will never go away completely. If the heartbreak leaves complete, the memories of the good times with your pet will go with it. Having that urn means your pet is still alive in your heart, always.