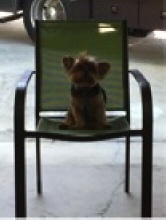 We have some very sad news to share. Our little Yorkie, Bentley Boy, departed his charmed life on Tuesday, August 11, 2015, during the wee hours of the morning. His death was very unexpected. We believe his little heart gave out on him. It appeared that he died in his sleep. We are so thankful he died of natural causes and did not suffer.

Losing Bentley has broken our hearts, but we are comforted because we know he was dearly loved, and that he lived his life to the fullest everyday! We can all learn from that. As many of our friends know, his favorite activity was playing musical chairs around a campfire. We are grateful that the day before he died he was happy, healthy, and playful(yep, including stealing chairs). Most recently, he was observing and learning the process for changing Archer Clyde’s diapers. ïŠDuring the first years of Bentley’s life, the children in the Suwannee County ELP (Gifted) classes helped spoil him. They taught him to be a highly sociable and loveable little guy. Over the span of his 70 years (that’s 10 years for humans), Bentley attended First Baptist Church many times, including Sunday School. He particularly enjoyed sitting in the balcony to hear Brother Jim Robinette’s sermons!

Bentley was a devout FSU fan! He attended many FSU football games where he loved tailgating for long weekends at Mr. Eddie’s Ramblin’ Renegades RV Park. Bentley loved traveling! He traveled extensively throughout Florida and the United States. As a puppy, he flew with us to San Diego for his daddy’s conference. Since that time, Bentley has RV’d to several mountain destinations and many beaches. His favorite beach is Beverly. He was a welcomed guest in many homes. His favorite was Sadie Belle’s in Ocala because he got to ride in the Polaris. He always loved playing “the host with the most” when he hosted RV road trips with family and friends.

In 2013, Bentley moved to Luraville and enjoyed living the “Huck Finn” life as a River Rat. He made many friends at the river, and his Uncle Jack, Jr., Commander of the Luraville Swamp Patrol (LSP), deputized him. Bentley was a Jr. Deputy for Uncle Jr. Bentley and he served proudly in that role. He routinely rode “shot gun” in the official LSP vehicles with his daddy and Uncle Jr. He loved pontooning and anything else that involved his daddy. He was always at his daddy’s feet. ïŠ

Bentley’s friends and relatives, including his newest friends in San Antonio, Texas, (where he enjoyed his retirement as a “Long, Tall Texan”), will miss Bentley very much. His momma, daddy, and Lady will miss him most. He was a dear and loyal little sweetheart who loved everybody! We know he is in Doggie Heaven!