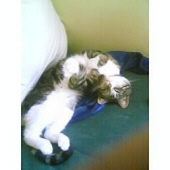 Sox, aka Mr. Moo, was born on April 4th 2001. I, his mama, picked him out of his litter in May of that year. He was the first pet I owned on my own. I was 18 and never had a cat. I was so excited to get a kitty! He was loved so much. At 8 wks old he got out and was sitting on my retaining wall. A couple seen him and thought he was lost so they picked him up and took him home. I was devastated and couldn’t sleep. I put out flyers for him, the couple seen one of them and called me! Within 2 days, I had him back! I was never letting him go, so I decided to declaw and neuter him along with teaching him to walk on a leash! Sox soon began to love the leash, loved every single chance he got to go for a car ride. Yes, that’s right! His third nickname was catdog! He would hang his head out, up until about 30mph. Then he would come in and just lay in your lap. He loved water as well. Would hang out with you if you took a bath and had to drink only from the faucet. He was truly one of a kind! No matter how hard I tried to keep him an inside cat, he refused. He loved the outdoors. I felt very guilty declawing him after realizing he wasn’t going to ever be that indoor cat I wanted, but he held his own! When he was 3, I decided to get a dog. I got a pit bull puppy! They were so close and Sox remained to head of the house. He loved hair, anyone who had a head of hair, he was your best friend! All you had to do was come to him, put your hair in his face, instantly kneading and purring would begin! Only a few short weeks ago, he began to drool a blood stained color and ate less. Soon no water or food. I thought it was Stomatitis. I brought him to the vet for antibiotics and possibly hearing tooth extraction. This was April 7. His 15th Birthday was just the 4th. The vet opened his mouth and immediately said cancer. Sox had grown a tumor under his tongue so big he couldn’t swallow anymore! So, to 15 wonderful years. God bless my beautiful Mr Moo, may you rest in peace now baby boy. You are missed dearly!