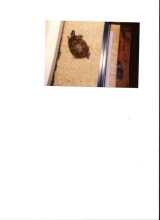 Tonya ‘Turtle’ Krivac was hatched approximately 31 years ago. She was adopted by the Mary Krivac family 11 years ago. She passed away on September 18, 2005. Tonya’s life was anything but uneventful. She moved around quite frequently with her military family. She was in Virginia, Louisiana, and then San Antonio, TX as of February 2003. People always view turtles as being slow, but Tonya was anything but. If Tonya was able to roam through the house, she would take off and was very difficult to catch. Tonya could also show an attitude to her canine siblings. She would hiss at them and then turn and go another way. Tonya will never be forgotten and will be sadly missed by her family.