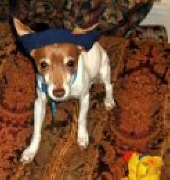 Our beloved Tiny was born on May 29, 1999. He was an adorable tan and white rat terrier who was very sensitive, protective and tender. He is survived by his rat terrier brother Junior, his chihuahua brother Frido, and his chihuahua sister Lola. His dads Roland and David enjoyed his company for 10 & 1/2 years. He was suffering from cancer, and was euthanized on January 4, 2010. He is fondly remembered for playing with his rubber squeek toys, his high pitched bark, and his loving marble like eyes. We miss him, but know we will see him again in heaven.