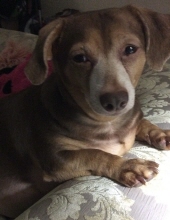 Tyler’s nickname was Roe Roe. He was a rescue, found by a family, and brought to the vet where I was with my past dog Travis who had just pasted away. My sister and myself Fell instantly in love with him. He was a gift from God. All my kids were rescues,He was extra special, found out he could talk. He called me mum, just as if he was British, he would go in another part of the house and call out mum, he would say I’m Roe Roe, other things he said were I love you, no, yum yum yum, I don’t know, hello, I’d be on the phone and he’d be talking and the caller would say whose that, he talked so clear, he say it’s Roe Roe. So cute. I still here him say mum. Even thou he’s not by my side he lives in my heart forever. Before he passed I told him it was okay to go, and I will see him again, then he took a deep breath and closed his eyes. His birthday was the day we got him, April 24th, 2012. He went to heaven December 27th, 2020.