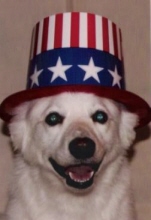 This is in tribute to our recent loss. Our beloved Dawg. He was the best guard dog I have ever seen. He was so smart. He could do the obedient commands. He was very protective. He would stay in the yard on command. But then we moved. So to protect him, during the move, I had a fence put up.

The other night I found the gate open, and he was not in the yard. I called to him and he came running. I thought I had fastened the gate incorrectly. The next night when I let him out, I made sure that I latched the gate correctly. But when I went to check on him a few minutes after let him out, the gate was open, and he was gone. I called to him, bet he didn’t come. I ran out to the road calling his name, but he still didn’t come. I looked one way, he wasn’t coming, I turned around, looked the other way, I and screamed for my family. I knew it was him, but he was too far away for me to see. I was told to stay back, but I couldn’t. To see his crumpled body, with tire marks across his torso broke my heart. He is missed dearly.

Having him curling up next to me and holding my hand on his tummy so I would rub it. If I would stop he would wine and grab for my hand with his paws. He was so precious.

I guess what I want to tell you, don’t make any assumptions, you never know what you are inadvertently teaching your pets. They watch your hands and your movements all of the time. I miss my Dawg. Don’t make assumptions about your pet’s intelligence, or you may meet the same fate my family and I are enduring. It really is a hard situation to have to go through, so take preventative measures, instead of making assumptions.